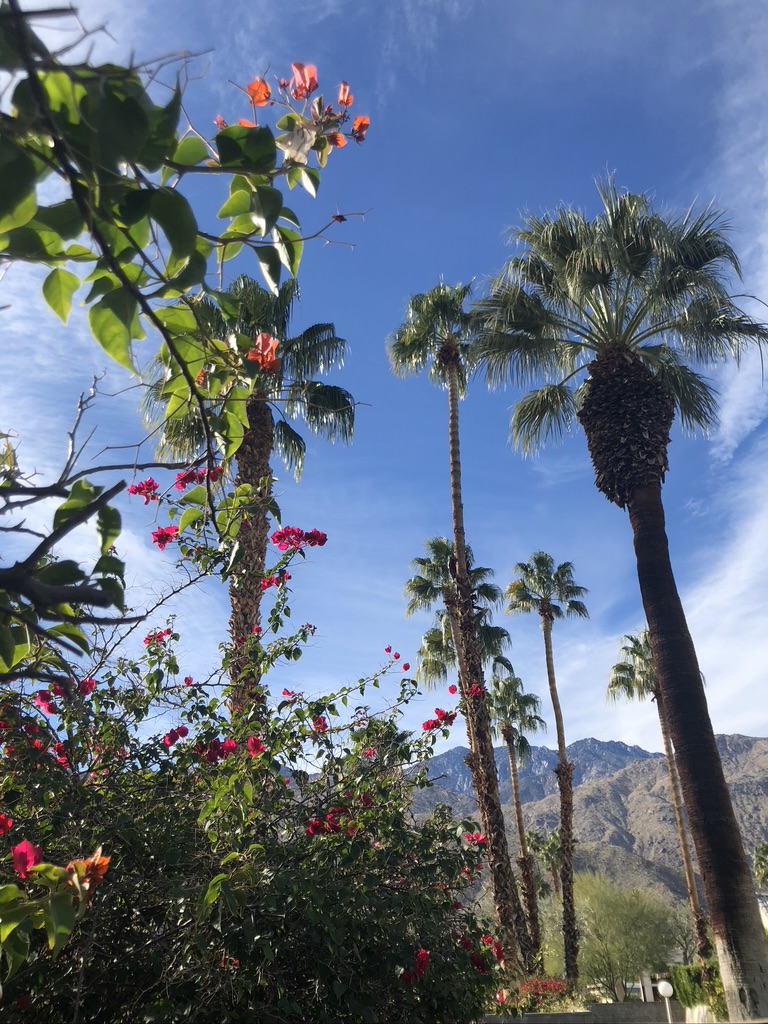 I think I can say that still? I feel like it’s one of those things that you can spread though the month of January, to people you haven’t been able to say it to yet. But here we are in not so mid-January, and I haven’t posted yet in the new year.

I think after December, and having so much going on, somehow January always feel like the longest month, which I like. Each day feels like you can try something new. I once had a stranger say to me “Oh, you’re a January person.” I didn’t know this was a thing, like being accused of being a morning person, but yes, I guess I’m a January person.

I went to Palm Springs for a girl’s overnight trip with my friend Dyanne. Palm Springs is east of Los Angeles, in the desert. After passing through lots of nothingness and giant windmills, you’ve arrived. It’s a funny place, mostly known for its mid-century architecture and a popular retirement community, it really is an oasis in the desert. During the winter the population triples in size, people seeking the warmth of the January sun. It’s one of those places where going there, forces you to do nothing. Sitting by a pool with a drink of some sort, is the optimum way to spend time while in Palm Springs. We went the week after New Year’s and everything was fairly inexpensive, and it was empty, because not many people are escaping the week after New Year’s.

Palm Springs, Indio, Joshua Tree, Salvation Mountain, in my mind are all in the same area, and close to each other. And they are, kind of, but the distance between Joshua Tree and Palm Springs is close to 40 miles, closer than Los Angeles to Joshua Tree, but still a little bit of a drive. I haven’t spent a lot of time in Palm Springs, the last time attending a friend’s bachelorette party.

This time was pretty mellow, walking to happy hour at Sugar High. We sat and drank blood orange margaritas on the rooftop patio. It was very pretty, but also empty.

We ended our outing by heading for Mexican food. And then taking the bus, yes the Palm Springs bus, for ice cream. And then heading back to our Airbnb and watching crappy TV, of the Bravo kind. We watched Dirty Dancing, which I had never seen in it’s full form, always just in clips. I know. I live in a cave.

The next day we got up and drove to Joshua Tree National Park. It’s probably the closest National Park, to me, and I had never been before. I’m not a desert person, but Joshua Tree is like no other desert, or at least not the desert that I usually imagine. Joshua Tree National Park is spread over two deserts, the Mojave and the Colorado, made up of two different types of landscape.  On the Mojave side, it’s really rocky, with these giant rock formations all over, And the Joshua Tree, which is a tree that primarily exists in California and Nevada. I like to think that when trees die, they come back reincarnated as Joshua Tree’s. They look like these scraggly trees that have branches growing in all directions. They also can live for hundreds of years, making Joshua Trees seem otherworldly.

The Colorado side has large spans of nothing but desolate land, and then we came upon the Cholla Cactus Garden. Which is 10 acres of the Teddybear Cholla cactus, which are all these fuzzy looking cacti, clustered together.

We were there during the day, and it was cold, which makes me never want to camp there, at least during the winter. But there were people walking around, hiking, climbing, we even saw two guys walking around with a pizza box. Proving that pizza can travel anywhere. We just drove through, taking a few hours to work our way from end of the park to the other, stopping and getting out periodically. Even if that’s all you have time to do, I would recommend it. It’s also inspired me to want to visit more local(ish) places this year. Visiting places close to home, makes me appreciate California and my home even more.

I don’t know  where else I’m going this year, but so far it’s off to a good start. What are you going to visit this year?